The Andong Boys & Girls Choir was formed in 2011 by Dr. Kiwon Kwon. Despite its short history, has been become one of the finest ensembles of its kind in the nation. The choir consists of boys and girls between age 8 to 16, from the Andong city areas who loved singing. Its repertoire includes works by the immortal masters, as well as folk and contemporary music from around the world. The choir gives concerts in the area’s prominent venues, but it also reaches out to nursing home and care center residents and performs at community and corporate functions. It was invited to perform at a national celebration, which was broadcast live to KBS, MBC and SBS significant broadcasters. Among its international prizes are Silver Medal at the 2014 World Choir Games in Riga, Latvia, Gold Medal at the East Asian International youth choral competition in Yentie, China. Also, third place at the Florence International Choir Competition in Florence, Italy, Silver Medal at the International Choir Festival in Tokyo (2018). 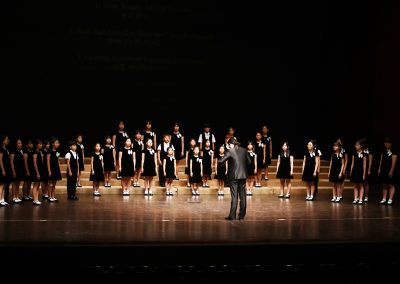 Kiwon Kwon is a distinguished Korean conductor and music educator. He has voice performance and choral conducting degrees from Andong National Univ and Texas State University, and the DMA degree in choral conducting from Kwangju University. Also, he studied DAM degree in Voice at the University of Texas in Austin. Kiwon Kwon was awarded the Conducting Prize given from East Asia International Youth Choir Festival in China. For over 20 years, he has been serving as a music director of several choirs in the United States and S.Korea and has received high recognition for his innovative program and also for his commitment.